A provocative photo of Pakistani singer Rabi Pirzada, which shows her wearing a mock suicide vest, stimulated outrage in India, where users accused her of encouraging terrorism. She, nevertheless, sees it in a various way.

The tweet published by the Lahore-based singer on Tuesday drew quite some attention on the social media, with commenters hurrying to state that she gave a vibrant example of how Pakistan is a hotbed of terrorism, unlike its eastern next-door neighbor.

“Wow!! You looking awesome in traditional Pakistani dress,” one commenter stated, while another one ranted: “Threatening suicide battle to Modi on Twitter, Pakistanis are actually a gone case.”

The image propagated even more, with mad and ironical remarks along the ‘traditional vest’ lines.

saying the image originated from a video, where she condemns suicide attacks.” I wish peace and humankind and all those Indians providing me lectures on

Modi safety. Can you justify 3 months of curfew without food and medications? I posted it to remind u stop this cruelty versus IOK, “she said, describing the Indian-controlled part of the challenged area of Kashmir. She later on erased the initial provocative post. The Indian government stripped the mainly Muslim region under its control of its decades-old autonomy in August

and imposed stringent security measures in expectation of public outrage by the local population. Pirzada is among lots of Pakistanis, who have actually been vocally opposing the advancement. Surprisingly, the suicide vest picture was shared on her twitter account earlier on Monday with a caption in Urdu, which cautioned that a

shared their dreams, including to”avenge the death of each and every single Muslim “by pro-Indian forces. On rt.com< img src=" https://cdni.rt.com/files/2019.10/thumbnail/5da56fcb85f540320460e07e.JPG "alt=" FILE PICTURE. Students of a madressa in Lahore. © REUTERS/ Mohsin Raza" > Islamabad implicated of persuading kids over student

body’s VIDEO on how’Hind will become 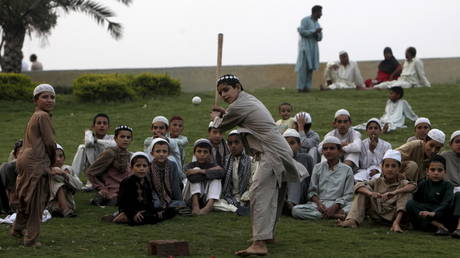 Pakistan’ Think your buddies would be intrigued? Share this story!