Home / All Posts / Uncategorized / Instant ban for Iran’s IRGC on... 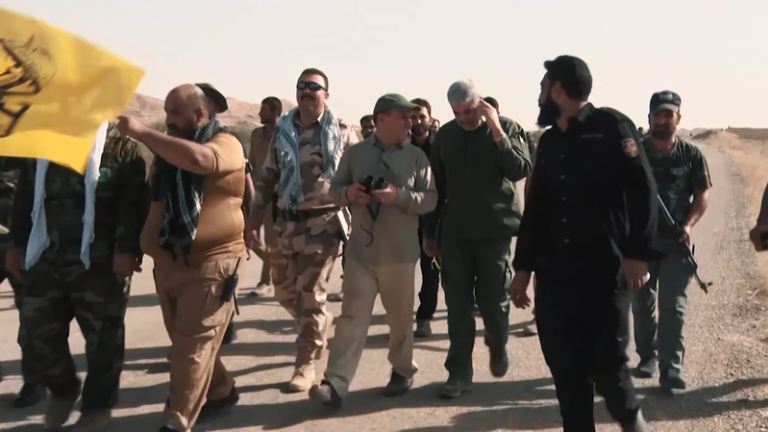 This article was originally published by Radio Free Europe/Radio Liberty and is reprinted with permission.

With some 800,000 followers, the Instagram page of the commander of Iran’s elite Quds Force was among the most popular pages of Iranian officials on the photo-sharing website.

The Instagram comments, public appearances, travels, and promotional posters of Qassem Soleiman — who as head of Quds commands the vaunted Islamic Revolutionary Guards Corps (IRGC) outside of Iran — were shared on the Instagram page, which is one of the only major social-media sites that has not been blocked by Iran.

On April 16, a day after Washington’s designation of the IRGC as a foreign terrorist organization (FTO) came into effect, Soleimani’s page, along with the Instagram pages of several other IRGC commanders, were blocked.

“Sorry, this page isn’t available,” a message on the page reads. “The link you followed may be broken, or the page may have been removed.”

An Instagram spokesman said it was operating “under the constraints of U.S. sanctions laws.”

“We work with the appropriate government authorities to ensure we meet our legal obligations, including those relating to the recent designation of the IRGC,” the spokesman said.

The blockages were condemned in Tehran while prompting renewed calls from hard-liners for a blocking of Instagram, the second-most-popular social-media platform in Iran after the communications app Telegram, which was blocked last year.

“When you tear out a man’s tongue, you aren’t proving him a liar, you’re only telling the world that you FEAR what he might say,” Communications Minister Mohammad Javad Azari Jahrom wrote on Twitter, blocked in Iran since 2019, quoting the cult TV series Games Of Thrones.

Others hard-liners, including Hossein Allah Karam, a leader of the paramilitary Ansar-e Hezbollah group, blacklisted by the U.S. for human rights abuses, also agreed that the time had come for the Islamic republic to block Instagram.

“Social-media sites use any opportunity to harm national interests, we need to be ready to confront these plots and take reciprocal actions,” Allah Karam was quoted as saying by Iranian media. “Under the current conditions it is needed more than ever to filter these social-media sites in support of the IRGC,” he said, adding that “the blocking of hostile social-media sites such as Instagram will [prevent] them from doing what they want.”

The conservative chairman of the parliament’s Foreign Affairs Committee, Alaeddin Borujerdi, said he will stop posting on Instagram to protest the blocking of the pages of Khamenei and the IRGC commanders.

In a video posted on Instagram, Borujerdi said the “unwise move” reflected “the depth of America’s hostility” toward the Islamic establishment.

To Block Or Not To Block?

Iranian hard-liners have long called for tighter Internet censorship, including the blocking of Instagram.

Earlier this year Javad Javidnia, secretary of Iran’s state committee on online censorship and deputy state prosecutor in charge of cyberaffairs, was quoted by domestic media as saying that the country was ready to block Instagram once the authorities agreed.

The move has been opposed by the government of President Hassan Rohani, who came to power in 2013 promising people more freedom and less censorship.

Iran blocks tens of thousands of websites, including news sites and social-media networks such as Facebook and Twitter, but many Iranians access banned sites through virtual private networks (VPNs) and other anti-filtering tools.